White Craggs is an imposing country house, which occupies an elevated situation at the Northerly edge of Lake Windermere in the tiny hamlet of Clappersgate, within close proximity to the town of Ambleside.

Comprising three luxurious self-catering apartments, the visitor experience at White Craggs combines opulence, comfort and the freedom to just do as you like, when you like. Whether you enjoy walking, studying wildlife. history, shopping, dining out or exploring the extensive range of lakes and towns the Lake District has to offer, White Craggs offers the perfect holiday retreat.

Set amidst a backdrop of steep hills and dense woodland White Craggs nestles within 3.5 acres of beautiful long established grounds , frequented regularly by distinguished furry and feathered visitors such as the red squirrel and green woodpecker. Its situation provides a fantastic vantage point for the south and east aspects of Lake Windermere and a panoramic window towards Wetherlam. Additionally its central location provides easy vehicular access to Ambleside, Hawkshead, Coniston and the Langdale Valley, whilst for walkers there is immediate access to Loughrigg Fell, Rydal, Grasmere and the Pikes of Langdale.

Many guests staying at White Craggs can't wait to return as it offers something for everyone and often a week or a fortnight's holiday is simply not enough. The house's interesting history and gardens invites thorough investigation. The views from White Craggs are well documented as being "unrivalled” and in the unlikely event that visitors should tire of the house and gardens, the breathtaking scenery towards the Brathay Valley, Windermere and the surrounding fells warrants further, extensive exploration.

White Craggs offers its visitors a beautiful and tranquil haven to escape to, far away from the hustle and bustle of modern day living. You'll find yourself being immediately transported retrospectively to a place back in time where the pace of life was slower, aesthetically more elegant and irrefutably more relaxing. 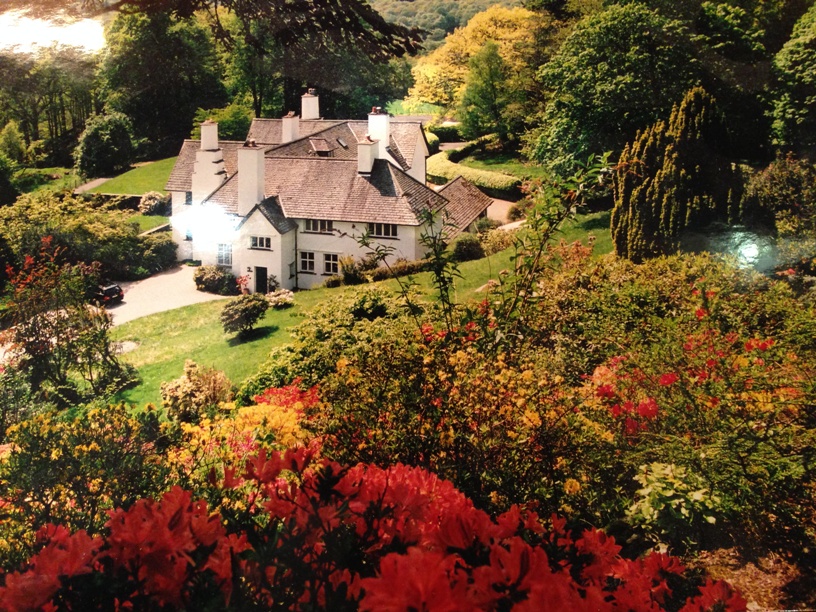 Built over a century ago in 1904, White Craggs is an imposing country property and a good example of pre 1st World War architecture of its day, known as the Arts and Crafts movement. The house occupies an elevated site at the Northerly edge of Lake Windermere, commanding stunning views of the surrounding countryside.

White Craggs, was designed by architect Dan Gibson, famed for five other prominent lakeside properties of the Arts and Crafts design genre, including Brockhole National Park Visitor Centre. The house's interesting architectural provenance certainly does not eclipse its outstanding visual impact. The property was built in 1904 for the Hough family who were truly fortunate to secure one of the most sought-after and tranquil settings for their family home. Charles Henry Hough, a surgeon, was struck by the "naturalness" of the site located in the heart of a district renowned for its natural beauty.

SThe house took just eleven months to build from the laying of the foundations to placing the last slate on its impressive roof. White Craggs is distinctively "Lakeland" in character including the traditional circular chimneys whilst also typically influenced by the architectural style of the day i.e. the Arts and Crafts movement. The Arts and Crafts movement began primarily in a search for authentic and meaningful styles for the late 19th century. It was also seen as an artistic rebellion to the eclectic revival of the historical styles of the Victorian era. The movement influenced the architecture of the day significantly.

Although the style and design tendencies of the architect commissioned, i.e. Dan Gibson, was often incorporated into the design of an individually bespoke or purpose built-house, certain widely adopted architectural characteristics of the era would have been built-in to the very fabric of White Craggs. Common design elements of the day; including rustic and "cottagey" surfaces, repeating designs, vertical and elongated forms creating a certain rural and robust effect are more than evident in the visual impact of White Craggs. This makes it an outstanding and 'zeitgeist' example of early 20th century architecture.

The house was completed by 1905. However the plans for re-shaping and creating the garden began in 1904 as Charles Hough had a vision to create a garden in terrain that seemed an ambitious challenge, as it was covered by a coppice, rocks and boulders. Mr Hough described the early development of the garden which also reflects the stark social and economic changes that took place during the era. The coppice woods would have had no commercial value, as in previous times they would have been cut down and used in the manufacturer of bobbins. With the advent of the industrial revolution the local bobbin industry was rapidly becoming extinct.

Profoundly Mr Hough said himself: "We have transgressed the laws of good taste or outraged nature because, although we have rooted up all the young sapling oaks, we have revealed a rocky promontory of priceless grandeur hitherto completely hidden, and have planted in the pockets formed by excavation and uprooting, flowering trees and shrubs, heathers and rock plants of all kinds."

Charles Hough also had a great passion for alpine flowers which he shared with two of the most eminent plant collectors of the day Reginald Farrer and William Purdom. Purdom, one of the best known 'Kew' plant hunters, was commissioned to design the 3.5 acre garden at White Craggs. The biggest challenge of the major excavation and the "rocky promontory" to which Hough refers, later called the ‘Rock Garden’ was the state of the soil. It was analysed as being poor, sandy and stony. Farrerer's famous book however 'My Rock Garden' was a case study citing that rock plants and Alpines thrived in this type of poor terrain, providing they received adequate moisture.

The Hough family's collective enthusiasm for rare Alpine and other exotic species was further endorsed as they financed one of Purdom and Farrer's plant collecting expeditions to North West China and Tibet. It was agreed that a proportion of the plants would be delivered to White Craggs. One-tenth of the spoils of the expedition were used in the creation of the ambitious rock garden. Its eventual completion was hailed a great 'horticultural triumph'.

White Craggs famously vaunted gardens are a joy to behold. Their history has been documented in the book 'Story of a Westmorland Rock Garden' which charts its provenance back to the turn of the 20th century. After more than a 100 years the maturity of the garden together with its original uniquely applied landscaping, has left a legacy of a stunning vista of colour, a wealth of rare species and alpines as well as unique architectural ornaments such as the 'belvedere' and the sacred shrine. Whatever time of the year you visit the White Craggs garden, there is always something unusual and beautiful to be observed. In the Autumn it is steeped in beautiful foliage of reds, oranges and yellows, quietly basking beneath the rust coloured fell tops.

In the summer the fusion of scent and colour from the Azaleas, Forsythias and Rhododendrons making a mere stroll around them a hedonistic experience of perfume and sumptuous floral vistas. Seasonally there is always something to admire and behold at White Craggs for the discerning visitor. It is as enchanting as it is unique, and powerfully reminiscent of an age gone by and as timeless, intriguing and enigmatic as nature itself.